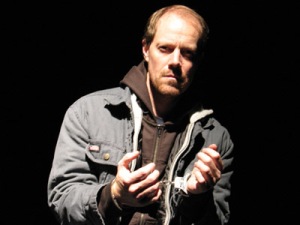 Mercy Killers, a one-man, one-act play written and performed by Michael Milligan, made what is sure to be a lasting impression at ARTS/West last Monday, February 25. Boldly and wonderfully acted, the play left many audience members in tears, inspiring both compassion and a sense of the need for change. Milligan, a Broadway actor and Ohio State University alum, is currently on tour performing his act in cooperation with SPAN Ohio in order to advocate health care reform in the United States. His play, first and foremost, is an attempt to speak out on behalf of the gross numbers of individuals who have spiraled into bankruptcy as a result of medical debt. In performance, however, Milligan does much more than this. With an eye toward individualism and the American dream, Mercy Killers ultimately calls for—much more than medical reform—reform of the values that comprise our culture today.

The play opens in contemplative darkness, with an excerpt from Woody Guthrie’s “This Land is Your Land” crackling overhead. Suddenly, just as soon as it was presented, the suspicious peace in which this leaves the audience is interrupted when the singer’s crooning is jarringly cut off by the sound of a siren, a crash, and a bright light that reveals our character staring anxiously but intently at the audience. Sitting at a table in a police station, face to face with a cop whom we never see, our protagonist Joe mouths the words “You’re in trouble.” He appears to be either incredibly anxious, or drunk, or both; but what begins to look like a police interview with an average criminal turns our to be much, much more. The police station, rather, becomes a venue for our protagonist’s testimony, and the act seamlessly transforms into the retelling of a tragic love story.

Joe is a staunch libertarian who, unlike many in our day and age, still believes in some notion of the American dream. He listens to Rush Limbaugh, asserts his self-reliance, and aspires only to make a simple, honest living doing what he does best: auto mechanics. Though he has no sizable wealth—he and his wife took their honeymoon in the mountains of Virginia, after all—he is confident in his skills and hopes to make enough to raise a family some day. Despite all this, his convictions about honesty and self-reliance are irrevocably shaken when his wife Jane is diagnosed with breast cancer only a few years into their marriage.

This crisis touches off the couple’s financial decline, as surgery and chemotherapy and even mere consultations leave them with medical bills piling up. After selling their home—as if circumstances weren’t already bad enough—Joe and his wife are driven to further desperation by medical malpractice and mortgage fraud. And the thing about desperation, Joe remarks, is that it makes you “bend your own rules.” Despite his professed belief in honesty and virtue, he is made to begin taking advantage of customers at his auto shop in an attempt to gather enough money to keep the bank at bay. The insurance company cuts the couple off; and as they stare down the throats of the financial overseers of the nation it becomes unclear which is the more dangerous disease, Jane’s cancer, or the dehumanizing and self-interested nature of the United States health care system. As the story steers toward its tragic but inevitable conclusion, one can hardly help but weep alongside Joe for the injustices he—and by extension the innumerable victims of our dog-eat-dog society—faces at every turn.

Of the many solutions Joe and Jane imagine to their plight, suicide is the most heart-rending. The term “mercy killer,” referring to one who commits euthanasia, implies that death can be more humane than certain degrees and kinds of suffering. According to Milligan, however, the meaning behind Mercy Killers is intentionally deeper than that. If “mercy” is another word for compassion—and action taken to reify that compassion in light of alleviating human struggles—then a “mercy killer” can in fact be a person, institution, or entire system that ignores and destroys the potential for this compassion among people. In this all the constituent institutions of our health care system—the hospitals, insurance agents, pharmaceutical companies, etc.—as well as the politicians and lawmakers that perpetuate it, are implicated.

While this reality communicates something highly political—that is, the need for health care reform—Mercy Killers is equally about something much more cultural and individual. Milligan claims that “Actually, Joe doesn’t really care about politics, as I think a lot of Americans don’t. It’s just kind of an identity game. You sort of lean this way or that because of the people you tend to hang around,” and it’s true: while someone like Joe might pride themselves with the label “libertarian,” Joe’s rugged individualism is much more a personal philosophy than a political ideal.

But as this philosophy stems in large part from the greater American culture surrounding him, part of the play’s message is that this philosophy is in many ways no longer adequate for our society. The kind of libertarian individualism that Joe advocates—its small-town notions of self-reliance, independent gain, and privileging of local community over big government—we see is ultimately largely responsible for Joe’s circumstances. On one hand, he is taken advantage of by many, including those working in the hospitals, pharmacies, and courts, etcetera, whose desires are for independent gain; and on the other hand we see that his assumption of his own self-sufficiency is misguided and inadequate toward alleviating his struggles.

Milligan compares his story to the classic story of Oedipus, in which the titular character discovers that it is actually himself that is responsible for the plague in Thebes. Perhaps the most striking of Mercy Killers’ implications is that Joe, because of his own cultural predispositions, has actually contributed to the suffering of people like himself. It is the same attitudes (though admittedly brought about by need rather than want) causing him to take advantage of his customers that cause medical officials to take advantage of him and his wife; and we see the effects of this attitudes in the impersonal nature with which Joe is treated in his struggle, his alienation from his community, and his deteriorating relationship with Jane. In the end, Joe’s peace of mind, just like that touted by the Guthrie tune at the play’s open, is crudely interrupted.

Mercy Killers is thus a call for both health care reform and cultural reform. In the most immediate sense we must change our health care system in order to remove its dehumanizing aspects and prevent it from privileging wealth over people; SPAN Ohio advocates the benefits of the single-payer system, in which the government is responsible for health care costs, to these ends. In a broader sense, however, the play calls for us to examine and redefine our individual and cultural values. As the playwright puts it, “the ‘individualism’ meme is overhyped and romanticized and…historically inaccurate.” Rugged cowboy individualism, though often portrayed as the backbone of the American dream, did not actually inspire and will not sustain the nation. Rather, we need to return to a more nuanced view of the community as a social and political body, a venue that can mediate the needs and responsibilities of the public and private sectors—the government, and the individual. In order to do so, we must first replace a philosophy of pure individualism–which has been outmoded or, as some would have it, was never relevant in the first place–with a communitarian one which, while still validating the individual, can still serve the mass’s common needs. With this view, Mercy Killers is not only about reclaiming our health care, but about reclaiming our humanity from a brutal and shortsighted system. Milligan quotes an age-old Moravian motto as a potential foundation for addressing these concerns: “In that which is essential, Unity. In that which is not essential, Liberty. In all things, Love.”

Mercy Killers is a must-see for those affected by a health care system in need of reform, for those whose strength and self-reliance has not brought them the success they were promised, and for everyone else as well. Milligan will be performing at the Van Fleet in Columbus, Ohio from now through March 9; and for those unable to attend a performance the play will be filmed and posted online for free viewing shortly after. More information can be found at http://www.mercykillerstheplay.com.